MONTREAL, Oct. 19, 2021 /PRNewswire/ - Age of Union, a non-profit environmental alliance creating a global community of changemakers, launches today with a pledge of $40 million and debut projects in five countries by tech leader and environmental activist Dax Dasilva, known for his role as Founder and CEO of Lightspeed Commerce. Infused with startup and technology DNA, the new organization allies with hands-on, boots-on-the-ground conservationists worldwide in order to protect the planet's threatened ecosystems. Leveraging Dasilva's experience as a tech entrepreneur, Age of Union will foster innovative solutions to elevate the work of all conservation projects. By supporting, funding, and making visible these individuals and organizations who are solving critical environmental challenges today, Age of Union seeks to inspire high-impact change around the world. 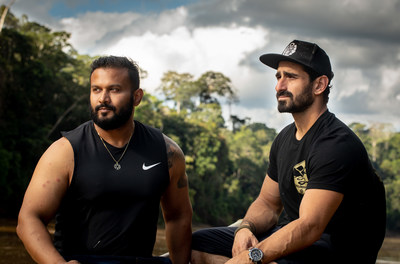 "I have launched Age of Union as an action-oriented environmental initiative based on the immediate urgency to save the planet and its threatened species and ecosystems," said Dax Dasilva, Founder of Age of Union. "The next decade is crucial – we must change the narrative on our environment to one that is hopeful. Through Age of Union's conservation efforts, we hope to inspire change based on the notion that all acts, both big and small, when acted on together, can change the trajectory of our planet for the better."

The launch of the environmental alliance follows Dasilva's 2019 release of his book Age of Union, a compelling guide for igniting today's changemaker. Grounded in four pillars—leadership, culture, spirituality, and nature—the book advocates that the time for change is now and that our choices are the catalyst. This mission comes to life through the environmental alliance for the guardianship of the world's ecosystems in the following debut projects in five countries:

These five projects mark only the beginning of Age of Union's long-term commitment to conservation initiatives that will protect and restore some of Earth's most precious ecosystems. Dasilva's pledge of $40 million will go towards funding these five projects with future conservation efforts to be announced ongoing.

As part of its call to action, Age of Union will produce short documentaries on select projects with plans to premiere the first film We are the St. Lawrencein partnership with the Nature Conservancy of Canada on October 26 in Montreal, October 28 in Toronto, and with plans for Vancouver in late November.

"The St. Lawrence River watershed holds 20 percent of the globe's freshwater reserve, and its estuary is one of the world's largest and most biodiverse. Sadly, humans have taken this for granted," says Dasilva. "We dump our waste here and use it as a superhighway for cargo ships when it is also home to wildlife like whales, sturgeons, birds, and much more. We hope with our support of Nature Conservancy of Canada, preservation efforts, and this film, we are able to foster a community of support and respect for these great waters."

"With Age of Union's generous support, we can now expedite the impact of current projects and begin new ones," says Joel Bonin, Biologist and Associate Vice-president at the Nature Conservancy of Canada in Quebec. "To protect the biodiversity and wildlife of the Saint Lawrence River, efforts include collaborating with landowners to acquire exceptional natural habitats, working with local farmers to transition to more sustainable crops like hay in flood plains, limiting erosion of shorelines, and restoring channels and swamps to promote fish spawning. Finally, we want to reach out to community members whose engagement is essential to improving how we use the water and care for the river itself."

Following the debut of We are the St. Lawrence, this and all future films will live on Age of Union's website alongside informative articles and video content to help educate the public about crucial environmental issues.

About Age of Union Alliance
Age of Union is a non-profit environmental alliance that supports and makes visible a global community of changemakers working on-the-ground to protect the planet's threatened species and ecosystems. Launched in October 2021 by tech leader and environmental activist Dax Dasilva in Montreal, Canada, Age of Union seeks to ignite a flame within every person through conservation efforts that solve critical environmental challenges around the world and inspire high-impact change by showing the positive impact that every individual can make.