U.S. natural gas futures were down for the fourth session on Thursday, quickly tumbling into a bear market as bullish bets evaporate on mild weather. Sentiment in U.S. natgas markets feels a lot like 2018/19 when the so-called 'widowmaker' spread widened then quickly tightened, leading to the blowup of at least one commodity firm on a wrong way spread trade. There's also a spread trade between E.U. and U.S. natgas that has left top commodity houses reeling ahead of the Northern Hemisphere winter.

The massive reversal in U.S. weather forecasts has crushed some of the world's largest commodity traders, mainly because the so-called 'widowmaker' spread. The spread between March and April Henry Hub contracts, which were as wide as $1.90 per million British thermal units in early October as traders bet on tight inventories, has plunged to now 23 cents, a complete collapse as outlooks forecast mild weather.

There's a reason why this spread trade is referred to as a widowmaker, given the weather-dependent volatility. 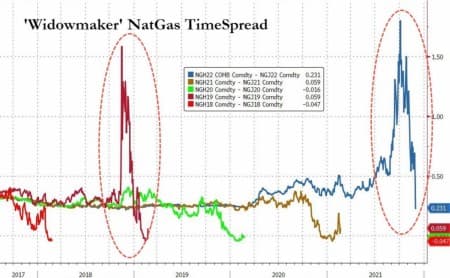 "It looks like at this time we're going to have plenty of surplus going into winter and even coming into spring," Dennis Kissler, senior vice president at Bok Financial Securities, told Bloomberg.

So while U.S. gas stockpiles are in line with averages, there is chaos in energy markets across the Atlantic. E.U. gas stockpiles are well below trend, and traders who went long U.S. gas and shorted E.U. gas were royally blown up this fall (in an arbitrage trade that went horribly wrong). 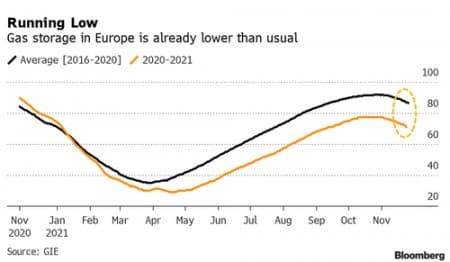 But the 'widowmaker' time-spread may have a competitor for that title...

Back in October, top commodity desks were monkey hammered with margin calls from wrong-way spread trades (or arbitrage trade) gone wrong between U.S. and E.U natgas markets. Glencore, Gunvor, Trafigura, and Vitol are among the commodity houses that faced massive margin calls on their wrong way spread trades.

For years, E.U. (blue) and U.S. natgas (black) prices have traded within a well-defined range. However, this year is an anomaly as an energy crisis and colder weather sent the Dutch month-ahead gas, the E.U. benchmark, to near 100 euros a megawatt-hour. In comparison, U.S. natgas tumbled into a bear market on warmer weather and ample supplies.

The windowmaker spread is not the only one at extremes. Shown below is the spread between E.U. and U.S. gas has blown out on a worsening energy crisis and cold weather. 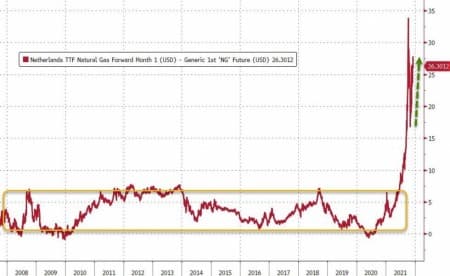 La Nina weather conditions worldwide have made weather volatile in some regions, and some commodity desks that hedge on a medium to long-term timeframe have been caught offside.

Read this article on OilPrice.com

This story originally appeared on Oilprice.com