Review: The Doors Open Their L.A. Woman Vaults For The Album’s 50th Anniversary

If nearly seven hours of watching The Beatles creating their Let It Be album showed anything, it’s that crafting a pop song is a laborious, time-consuming, often frustrating task.  Starts/ stops/changes in tempo, differences in tone, working on some tunes while discarding others… watching the sausage being made is a long, drawn-out ordeal in the best of circumstances. And that’s concerning, perhaps, the finest rock band ever.

When it comes to The Doors recording L.A. Woman in 1971, their final album with frontman/poet/singer/songwriter/wildman Jim Morrison, the same theories apply. Except, in this case, there aren’t any video cameras to capture the action. And, while The Doors were often a terrific, even groundbreaking act, they were no Beatles.

Which is to say that listening to Morrison and his band plow through a few hours of previously unheard studio audio and chatter, trying to mold the songs for L.A. Woman, isn’t for everyone. Even those fascinated by the prospect of absorbing over a half-hour of the foursome (with two guests providing bass and occasional second guitar) bang out the album’s title track might balk at the actual experience. It’s something most only need to hear once… at best. 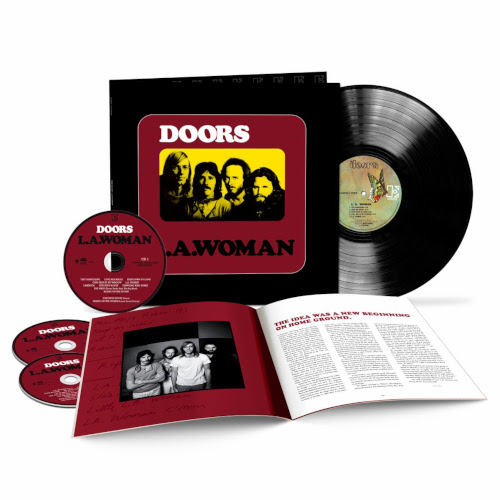 Since there are no visuals involved as with The Beatles, the process is even less interesting. The album’s opening track, “The Changeling” is the initial song to get the fly-on-the-wall treatment on the first of two discs dedicated to that concept in this expanded edition. How it was whittled down to its four and a half minute length after about a half-hour of cranking it out with just slight changes shows the importance of the producer’s role. Hearing Morrison shout and bellow “change” a few dozen times as he’s attempting to get the most potent one, is a trying experience. Ditto for him bellowing “Mr. Mojo Rising” (an anagram of his name) too often to count on the title selection.

Anyone who wanted to hear the original 10 track album, one of The Doors’ finest and bluesiest of their six studio sets with Morrison, has had plenty of chances. It has already been reissued in 2011 in a 40th Anniversary edition featuring rough mixes of each song, and back in 2006 as part of the Perception box, now out of print. The latter included not just a terrific surround sound mix, but an extra song “Orange County Suite,” both inexplicably MIA here.

The bigger hits on L.A. Woman were the radio-ready single “Love Her Madly” and the longer, more Doors-like, threatening “Riders on the Storm.” The latter so frustrated original producer Paul Rothchild, who called it “cocktail music” that he quit the project, which in retrospect seems like a blessing in disguise. That left the band and recording engineer Bruce Botnick to co-produce the album, which they did surprisingly well.

Songs like the minor key, almost experimental “L’America” and “The WASP (Texas Radio and the Big Beat) with their poetic bluesy funk, and a more than credible cover of John Lee Hooker’s double entendre “Crawling King Snake,” showed that Morrison was far from out of creative gas, even if his drug and alcohol intake had become an issue. He grinds out a tough bluesy “Been Down So Long,” tapping into his Howlin’ Wolf influences. Even weaker items such as the bittersweet ballad “Hyacinth House” (which also appears in an early rare demo form) reflected a dreamy quality that The Doors could summon at will. Comprehensive liner notes by David Fricke, expanding the ones he wrote for the 2011 reissue, recount the workings behind the recording in impressive detail.

The remixed (again) stereo sounds great, but not substantially better than existing copies. That makes this a specialty item for Doors ultra-fans who will hang on every blown take and false start of L.A. Woman’s rehearsals, but unnecessary for anyone else.